The Vern wants to take the world but reviews Brightburn instead

After almost giving up hope that they will ever conceive a child.  Tori(Elizabeth Banks) and Kyle Breyer’s(David Denman) prayers are answered after a spaceship crash lands in their backyard carrying with it an infant boy.  Brandon(Jackson A. Dunn) for the first 10 years has been a real sweet kid and the apple of mom’s eye.  But once he begins to find out where he comes from and just how powerful he is.  Everyone else has become obsolete to him.

Brightburn works best if you know right away that the parents are stupid.  Especially the mom.  I don’t think Elizabeth Banks was terrible or that it was a poorly written character.  I have know parents like Tori who could never believe for a second that their kid was responsible for bad things.  When Kyle shows the aftermath of what happened to the steel cage and she thinks it was just wolves, OK.  After Brandon crushes the hand of one of his classmates and she still stands behind him, fine.  But when she refuses to even think that her son is slightly responsible for the death of a close friend when he flat out lies to her about where he was and there was proof that he was near that area. I started laughing because this mom was just that dumb.  Even way before when she saw that her kid was drawing these odd symbols or using a strange language and didn’t say anything made me wish for her demise that much faster 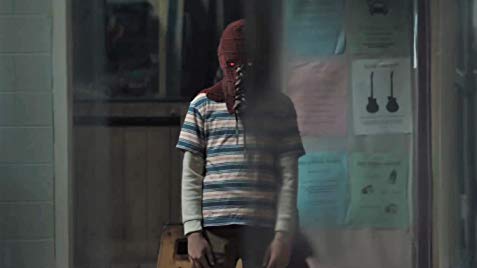 After being fired from Guardians of the Galaxy Vol 3.  I’m sure James Gunn (credited as only a producer) was looking for a project that was going to be a darker tale of the super hero origin story.    In this case it’s Superman because both are set on a farm with single parents who discovered an alien child with super powers. I’m sure it was quite therapeutic for James to imagine he was destroying Marvel with this idea.   I just wished writers Mark and Brian Gunn did more with this concept of a person born with super powers to a mortal world.  If  the parents destroyed the ship, would he have the need to find it and discover his true nature.  Are those who come from bad backgrounds doomed to being bad themselves.  Did the parents coddle Brandon too much.  I’m not sure if there was any themes to learn from this feature, but the gore fan in me dug this flick quite a bit.

Yes there are scenes in this that will make you very uncomfortable.  The shards of glass in someone’s eye or what happened after the car crash will make you squirm.  The special effects and makeup  on this are quite impressive and I’m glad that director David Yarovesky doesn’t hold back on showing you gruesome details in some scenes.  With this being Jackson A. Dunn’s first lead role in a major motion picture.  I thought he did just fine.  He is a freaky little sociopath and I was reminded of Ezra Miller’s performance in We Need to Talk about Kevin.  He has this persona that could seem sweet to stupid people like Tori and a down right destructive force to anyone else.

If you like horror movies where you cheer on the slasher, this is your movie.  If they didn’t make the mom so gullible I could have felt fear for her, but instead I was just waiting til Brandon took her out.  Not sure if that was the film’s intention but it was still fun.

I love movies and I enjoy writing about them too. They both go pretty much hand in hand with each other and it's fun to discover new classics. I co host the podcasts The Film Pasture, ScreenTrax, and soon Cinema Recall. While also contributing reviews and articles to other great sites when I can.
View all posts by The Vern →
This entry was posted in Reviews, Uncategorized and tagged brightburn, cinema recall, David Yarovesky, Elizabeth Banks, Guardians of The Galaxy, Horror, Jackson A. Dunn, James Gunn, Movie Reviews, superheroes, That Moment In, we need to talk about kevin. Bookmark the permalink.