There were two flicks that came out in the last few weeks that I want to talk about.  One is a great social satire about how we are living that feels just as important now more than ever and the ever has a guy talking to a CGI mask.  Guess which one made more money and which one was forgotten 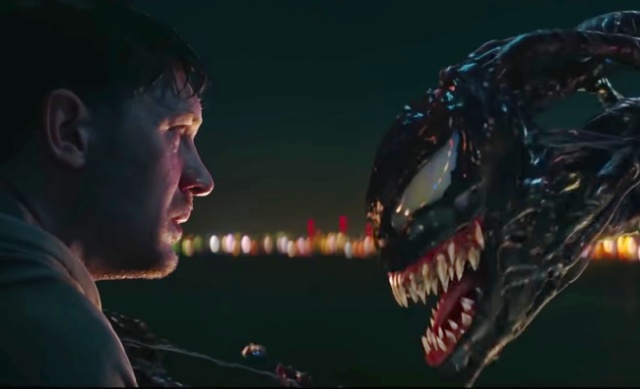 Look, I love Tom Hardy.  He was amazing in movies like Bronson, Locke and his turn as Bane in The Dark Knight Rises was truly great.  But in this solo feature about Spider-Man’s iconic villain.  He is just sort of bland.  Even when he gets infected by the symboite and the graphics take over.  I found the chemistry of this actor talking to himself to be bad.  Yes, I laughed while watching this, but I wasn’t laughing with it, I was laughing at it.  I heard many people try to defend this by saying that if you have low expectations you will enjoy it.  I wanted to have fun with this, I really did.  If they wrote Eddie Brock to be a jerk like he is in the comics.  I would have dug this more but for now I must stay away.

If you want to read my full review.  You can visit this link below.

This movie floored me.  It is one of the best fuck you from women to Trump and his supporters that I hope it causes some to start a revolution.  Not advocating violence, I’m just stating that women should start banding together and fight back in any way they can.  The movie is about this town called Salem who wants to kill these four girls after their phones and computers were hacked.    It’s about how people can make snap judgments on a person after reading a quick caption on Facebook or Twitter without reading the full article.  Odessa Young plays the lead character in this and what I love best is that she is flawed.  She makes some really bad choices and learns from them.  There is a great speech at the end where she goes on rant on how through years women have been conditioned to behave in certain ways by the media and society that was quite an eye opener.  But not enough people saw it.   I hope you will see this when it comes to BluRay.

Sorry I was away for a while but one of my best friends and former band members James “Chum” Leach passed away a few weeks ago(He is the man with the shades wearing the top hat)  He was a very gifted musician that I will miss heavily.  I was a drummer with Parental Advisory/Victory Riot for many years and played a lot of great shows. Here is one of them We just started a new side project before he passed away and I will miss heavily playing music with this man and sharing all the good laughs and great times with him.

I love movies and I enjoy writing about them too. They both go pretty much hand in hand with each other and it's fun to discover new classics. I co host the podcasts The Film Pasture, ScreenTrax, and soon Cinema Recall. While also contributing reviews and articles to other great sites when I can.
View all posts by The Vern →
This entry was posted in article, Reviews, Uncategorized and tagged assassination nation, bronson, chum, dark knight rises, james leach, Locke, odessa young, Parental Advisory, sorry to bother you, Tom Hardy, venom, Victory Riot. Bookmark the permalink.

7 Responses to The Vern loves Assassination Nation and hates Venom