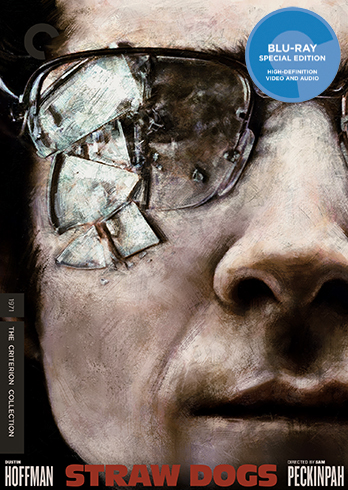 Sam Peckinpah’s Straw Dogs  is a great examination on the nature of violence in our society.  It describes the use of violence as a basic human necessity.   Just as food and sex are human desires, the need to protect ourselves and the ones we love is also a basic human need.   None of us ever really want to be in that type of situation where we have to use violence but sometimes it is important to use, just as the main character David soon discovers in this movie.

David(Dustin Hoffman) and his wife Amy(Susan George) have moved to a quiet country village in England to escape all of the chaos and violence of anti war protests.    They hire a crew to help work on their house while David works on his mathematical equations.  At first the workers playfully flirt with Amy and tease David for being such a book worm but their activities becomes more and more dangerous.  Since neither David or Amy want any confrontation they try to ignore it.  Amy however is becoming more and more upset at her husband for not being more of a man and stand up to these hoodlums.  David has never been in this type of situation before and has always managed to avoid any trouble.   Soon he will become stuck in a situation where running will no longer be an option. 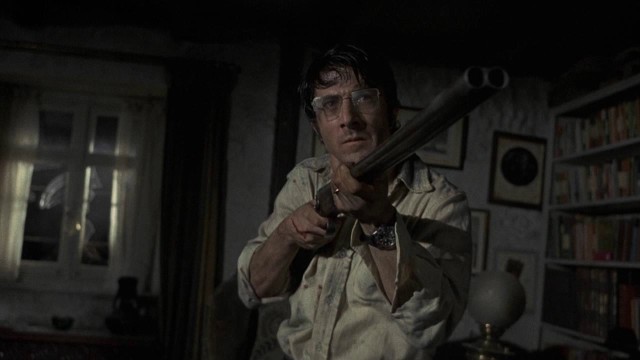 When watching this I got a bit upset at David for not sticking up for his wife sooner, but it may not be so simple if I were in his shoes.  I’ve only been in one or two fights and either they would get broken up after I threw a punch or I would just try and avoid them all together. Watching David and Amy’s reactions to violence in either experiencing it or executing it were both very honest and accurate.  These characters are not action heroes.  These are just every day folks who become stuck in a situation where they can no longer run or accept what is happening to them.   We would all like to think that we could live in a peaceful society and I fully agree with that statement.  We could but we don’t.

A remake of Straw Dogs was released  in 2011 with James Marsden and Kate Bosworth playing the married couple. In that version the couple decides to move from up north to the south and they change the character of David from a mathematician to a screenwriter.  The director for this version is Rod Lurie who also made the very good but rarely seen political drama The Contender.  I never saw the remake, but I really hope they didn’t have the main character all of sudden know how to fight.  This movie main theme is to show us that violence is something that should never be used, but when it comes to protecting yourself and the ones you love it is a necessity.

I love movies and I enjoy writing about them too. They both go pretty much hand in hand with each other and it's fun to discover new classics. I co host the podcasts The Film Pasture, ScreenTrax, and soon Cinema Recall. While also contributing reviews and articles to other great sites when I can.
View all posts by The Vern →
This entry was posted in Criterion Corner, Uncategorized and tagged Criterion Collection, Criterion Corner, david zalag goodman, dustin hoffman, film reviews, gordon williams, movie revews, sam peckinpah, straw dogs, susan george, violence. Bookmark the permalink.