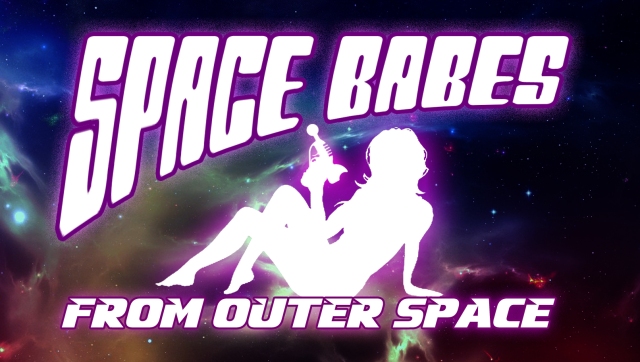 In this feature we meet three erotic extraterrestrials named Carrieola(Ellie Church, left) Vanessa(Allison Maler middle) and Ragyna(Alyss Winkler right).  I find that only one of their names not sounding like a sexual organ to be funny.  They are on the run from the Scrotes.  Other aliens who once looked like the men on earth before being mutated into what looks like a rock/stone version of Chet from Weird Science  when he became a  giant piece of shit.  The girls’ spaceship is low on fuel and the ship’s computer brings up information that there is a lot of it on earth.  The fuel happens to be stored in the lower region of many  adult males.  It’s their dicks OK.  I don’t think it was that tough to figure out where the story was headed  We soon meet Charlie (Brian Papandrea), whose a regular sex crazed guy that works on a farm and is the lucky one when the space babes land.  I was expecting a sex scene right away and it was great when it just shows him passing out instead.  When he comes to, and the girls explain their need for fuel.  Charlie has a plan for the three to work at a local strip club.  The energy of all the horny men should be enough to power their ship.  Meanwhile a few of the Scrotes who were chasing them have also landed and are seeking revenge.

Although these girls are dressed very seductive like and their ship is shaped like a giant boob.  None of them really know the actual mechanics of sex.  They just know that gyrating around and taking your clothes off is a way to get the attention of men. Which says something about how dumb we really are.   While the movie does feature nudity and  strong language.   The sex scenes are not that overtly explicit.  Which just adds more charm to this B style picture.  Trust me when I say there is stuff on network TV that is way more shocking then what is displayed here .

I enjoyed  the cast members very much in this, but wished the three girls had more scenes together.   Most of the time it’s trying to develop a relationship between Carrieola and Charlie.  While those moments are nice, including a great dinner sequence with his family that is really funny.  There was nothing  really engaging about their love sub plot.   I know in a lot of  sex comedies they do feature a couple that are in love and I guess it was maybe trying to satirize that common plot element a bit.   It just felt a bit unnecessary to me

There is  one  story element of this that should be completely removed.  That would be the side plot of a grandpa having to read his grandson a story while his daughter goes to work.  It’s not that I think the idea of an adult reading a story like this to a minor is offensive.  I just think it adds no weight to the rest of the story.  In The Princess Bride, it made sense.  Because the kid in that thought that it was gonna to be all lovey dovey, when his grandpa read it to him.  He expected one thing but got something else and in the end.  He didn’t mind the romance stuff as much.  The kid in the Space Babes movie just wanted a story.  He didn’t have any notions about what kind of story it would be.  It just didn’t fit and besides.  The opening credits were awesome and I would have loved for the movie to begin like that.

It would be very easy to just dismiss this as being sexist and doing nothing but exploiting women.  Which is the reason why the filmmakers had a horny old dude tell a story like this.  So they could say that it was a fictional character telling a fictional story.  But even with that element removed.  The movie is just a throwback to those movies that were played on late night Skinamax.  The story of this one reminded me a lot of Femalien from Full Moon Pictures.  Which was portrayed more of an erotic drama then this one.   Keep in mind that Basic Instinct was a big thing in the 90’s.   So all movies despite the ridiculousness of the plot were played in a lot more serious tone then this one.    Space Babes From Outer Space has no real agenda excpet to be a silly sci-fi sex comedy.  Although you could make the argument about the Scrotes being turned from beer guzzling, sexist, always hungry men, to these ugly like creatures as a statement about the men in our own culture.  Or you could just enjoy the hot women, have a laugh here and there, and not worry about the whole thing

I love movies and I enjoy writing about them too. They both go pretty much hand in hand with each other and it's fun to discover new classics. I co host the podcasts The Film Pasture, ScreenTrax, and soon Cinema Recall. While also contributing reviews and articles to other great sites when I can.
View all posts by The Vern →
This entry was posted in Uncategorized and tagged 80's, 90's, Allison Maler, Alyss Winkler, Bandit Pictures, Bran Williams, Cinemax, Comedy, ellie church, erotica, femalien, full moon pictures, harvest lake, HBO, Sex, Showtme, Skinamax, soft, softcore, space babes from outer space, The Princess Bride, weird science. Bookmark the permalink.