The Vern goes camping with some Killer Friends.

Three friends decide to bring one of their roommates  out camping so they can kill him in this very funny dark comedy from writer director Zach Noe Towers.

Jill(Jenna Lee Carrerio) is getting frustrated with her roommate Scott(Zach Noe Towers) and instead of asking him to move out, which would be kind of rude.  She enlists the help of her boyfriend Bryan(Dave Racki) and her best friend Heather(Peggy Sinnot) to help out with the dirty work.

If you have seen movies like Throw Mama from the Train or The Lady Killers you  have seen this premise done before.  One person gets annoyed with another and finds different ways to off that person.  Of course the outcome isn’t what our protagonist expects and the results are quite hilarious.  Tom and Jerry along with the Coyote and Roadrunner cartoons must have been big influences

Zach Noe Towers plays a perfect asshole.  Scott is the kind of guy who can seem genuine and nice before dishing out some awful words about his friends.  You can understand why his friends would want to kill him.  Peggy Sinnot as Heather is also a memorable role. She’s a very sweet girl who doesn’t want any harm to come to Scott even though he is the one that constantly torments her .  I enjoy how she keeps changing her mind in wanting to kill him.   Both Jenna Lee Carrerio and Dave Racki were great as their characters Jill and Bryan.  Both seemed to want to dispose of Scott, not just because he was just annoying.  But because he holds secrets they both told him in private and now he’s blabbing them out. Everyone in this has great chemistry with each other.  I would watch a whole movie with these characters. 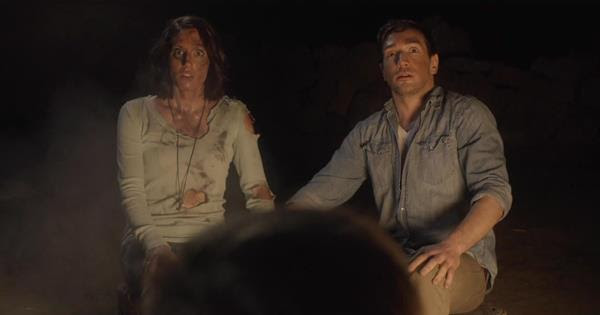 Good comedy is all about timing and Killer Friends delivers on that.  There is a certain kind of rhythm for the dialogue in movies like this and the actors just nail it.   It’s the kind of sitcom like banter that pays homage to good radio performers back in the day.  I could listen to this without any visuals and still understand the characters and most of the story. This was a really enjoyable short, and I look forward to what else Zach Noe Towers creates.

I love movies and I enjoy writing about them too. They both go pretty much hand in hand with each other and it's fun to discover new classics. I co host the podcasts The Film Pasture, ScreenTrax, and soon Cinema Recall. While also contributing reviews and articles to other great sites when I can.
View all posts by The Vern →
This entry was posted in Reviews, The Vern's Shorts., Uncategorized and tagged dark comedies, dave racki, jenna lee carrerio, killer friends, peggy sinnot, Reviews, Shorts, the lady killers, throw mama from the train, tom and jerry, zach noe towers. Bookmark the permalink.