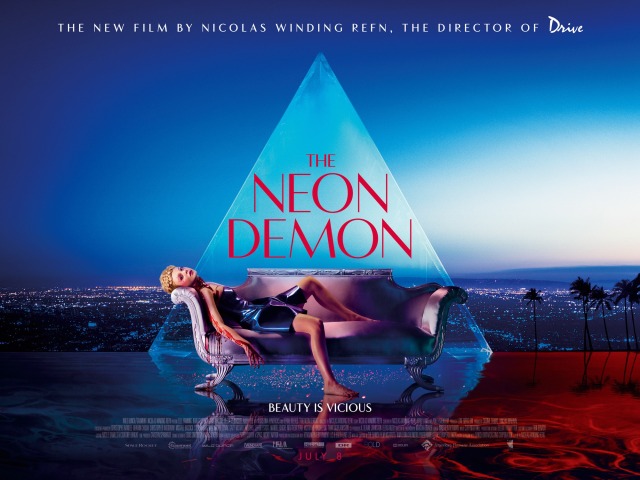 Brain.  Hey man How are you doing

Me.  Oh I’m doing good, kind of tired, but very well I must say.

Brain.   I haven’t been able to do much sleeping after the flick we watched last night.

Me.  I’m assuming your referring to The Neon Demon that just got released.

Brain.  I think the most bizarre thing about this is that it got such a wide release.

Me.  Yeah, we were able to see it at an AMC theater which was playing both the New Independence Day sequel and that Finding Dory flick right next to it.

Brain.  I wonder if this is because of the studio being Amazon because this one reminded me a lot of  Refn’s last feature Only God Forgives.

Me.  Oh shit, we could have had a lot of fun discussing that flick.

Brain.  We could now, but when I first saw it I was not impressed.  It’s taking me some time to appreciate that one.

Me.  And what were your thoughts on Nicolas Winding Refn’s latest opus. The Neon Demon. 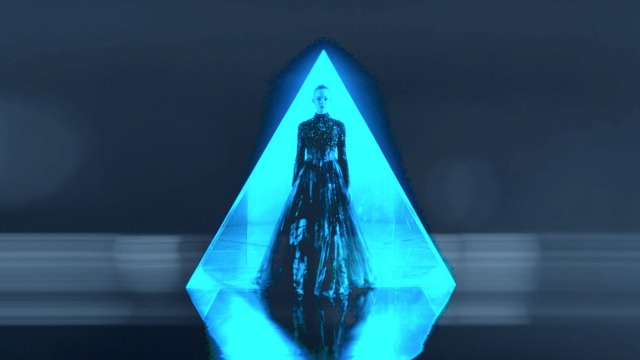 Brain.  It’s a visual masterpiece.  Every single shot from this movie was so beautiful I could see it being hung on walls at art museums everywhere.

Me.  Yeah Refn and his cinematographer Natasha Braier present a good use of color throughout that I’m sure will be studied by film students for a while.  I even love the use of music in this too.

Brain.  Oh I know.  From the opening credits, I was hooked.  It was difficult to take my eyes off the screen.  Usually when you take me to see a movie I do switch off here and there and start thinking about other things but for this I was fully engaged.

Me.  Well that’s great to hear man.  So since you were paying close attention, maybe you can tell me what this movie is about.

Brain.  I have no fucking idea where to even begin.

Me. Well just give me a basic synopsis.

Brain.  Ummm…OK.  Elle Fanning is a small town girl who moves to LA to become a model.  She’s told by everyone that she meets that she is going to be huge.  This causes some turmoil with the other models because she keeps taking all of their gigs.

Me.  She looks the same from all the rest of them, I wonder why they thought she was the best.

Brain.  Yeah, especially when they have Christina Hendricks in the cast and she looks just average in this.

Me.  You think this has something to do with Fanning’s character being all young and innocent.

Brain.  I don’t know if she was that innocent.  She certainly had no problems posing nude for the first photographer that asked her too.  Plus what the fuck was up with that gold shit he put on her.

Me.  Im guessing it was to symbolize that she is a golden icon now.

Brain.  Maybe.  I would just rather see Miss Hendricks nude and covered with gold paint.

Me.  Well we can both wish for her to be cast in a remake of Goldfinger, can’t we. 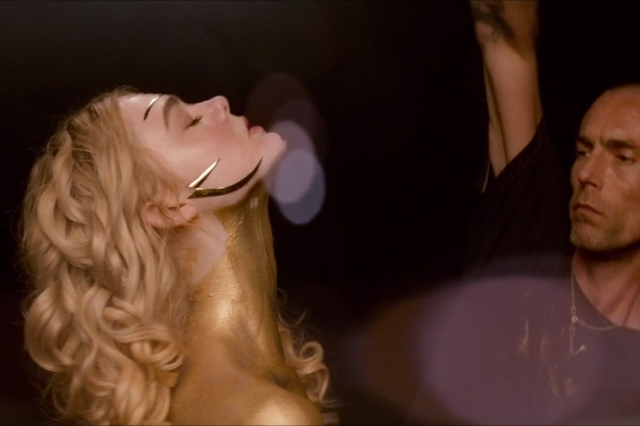 Brain .  Yeah, so this so called It girl becomes more and more famous and starts to buy into the hype from everyone that she is indeed all that.   The more and more famous she gets the more jealous the other models become until it reaches a boiling point. She does befriend another model played by Jenna Malone who really wants to be close to her and does some rather unorthodox measures to do so.

Me.  There is one particular scene that Miss Malone has that may turn a lot of viewers off .

Brain.  I think if you are not into this from the trailer alone.  You will be turned off by this.

Me. So is this just another style over substance feature.

Brain.  Well yeah, but that’s not necessarily a bad thing since the style alone is so fucking cool.

Me. Yeah, I agree with you that it does have a great look to it, but should style come over good story telling.

Brain.  If this was told in a standard way of a young girl who discovers the seedy side of fame, it would be quite boring because we’ve seen it before.  Like Refn’s last movie Only God Forgives I think it’s one that must be watched multiple times to understand.

Me.  Yeah, The Neon Demon certainly has more in common with that one then it does Drive.  Which is odd because that is the one that gets mentioned the most in all of the ads.

Brain.  What many don’t understand is that Nicolas Winding Refn was only the director of Drive,he didn’t write it.  With The Neon Demon, he did help with the story for it.  I would love to see him adapt another screenplay because his use of visuals would help make it stand out.

Me.  Yeah I once read that Ryan Gosling suggested his name otherwise he wasn’t going to be in the movie.

Brain.  Can you imagine if Drive was directed by Justin Lin instead of him.

Me. Well Gosling’s character would have been replaced by The Rock.

Brain. We’re getting slightly off topic, so would you recommend The Neon Demon.

Me.  If you enjoy movies that are big on visuals and less on story, I guess you could like this.  This is a difficult topic because just this year I watched Terrence Malick’s Knight of Cups and while it had very beautiful imagery, I did not care for it.   I thought the story in The Neon Demon is a bit more accessible ,but I understand fully if people don’t like it.  This isn’t one you can just pop in watch for the sole purpose of being entertained.  It has to be studied and analyzed.

Brain. So you were not entertained by this.

Me.  Well like you stated earlier, It’s difficult to take your eyes off the screen because the visuals are so stunning.  It’s just one that will have most viewers thinking about more after they left the theater.

Brain. Isn’t the sole purpose of a movie is to entertain.

Me.  I think a good movie should have the power to do both, but maybe we can save that debate for next time.

I love movies and I enjoy writing about them too. They both go pretty much hand in hand with each other and it's fun to discover new classics. I co host the podcasts The Film Pasture, ScreenTrax, and soon Cinema Recall. While also contributing reviews and articles to other great sites when I can.
View all posts by The Vern →
This entry was posted in article, Reviews and tagged christina hendricks, cinema sentries, elle fanning, jenna malone, neon demon, nicolas winding refn, Review, the neon demon. Bookmark the permalink.