Bubbawheat is hosting a cool blogathon over at Channel Superhero called Saturday Morning Memories.  I was suppose to do one last week, but I completely forgot about it until now.  My apologies for messing that up, but I have one now and I hope you like it.  Now I’m not sure if this played during Saturday Morning, but I remember watching it then.  So damn it, it counts. 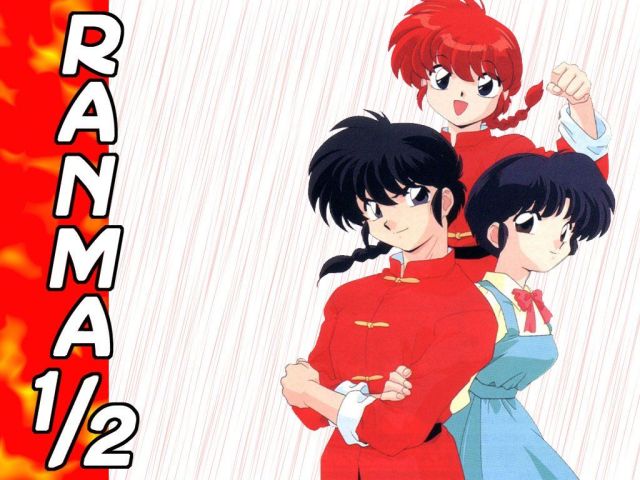 I should preface a little bit about my history with anime before delving into this title.  Growing up, without any internet access, it was next to impossible to find any of these kind of titles.  The first ones I can remember watching where bootleg copies of “The Guyver” and “Ninja Scroll”  I found an old VHS copy of “Akria” and was completely engulfed inside. Wait a minute

Engulfed.  What the hell did I just write there.   AHHH.  Anyways, let’s say that I was very impressed, despite that copy looking really worn out.  After that I was checking

out other titles like  “Bubblegum Crises” ,”Wicked City“, “Vampire Hunter D” and it seemed to me that anime only dealt in the Sci-Fi genre.  Oh and it had a lot of nudity and sex, but it was casual.  Until I saw “La Blue Girl” but that’s for a different post folks.  One day I happened by a title called “Ranma 1/2.”  Not knowing anything about it.  I gave it a shot and really loved it.  It was one of the funniest sitcoms I have ever seen and it’s humor still works today.

The premise is very simple to explain.   Ranma Saotome and his father Genma are karate experts or kung fu masters.  To put it more bluntly.  They know how to kick ass.  So while they are training they come across the cursed springs and decide to train here.  I mean with a place called the cursed springs.  How could you not train there.  They begin

fighting on top of what looks like large bamboo polls.  Genma tries to knock Ranma down, but instead he falls into one of the springs.  The area he landed in once belonged to a panda who tragically drowned.  So when he emerges he becomes this giant panda bear.  Ranma freaks out and falls into a pool that once belonged to a young girl.  So every time he gets splashed with cold water, he changes sex.  The only way to reverse the effect is to use warm water.   I should also mention that Ranma  and  Pops are on there way to visit the Tendo Dojo aka The Anything -Goes School of Martial Arts.  It is there where young Ranman is engaged to one of Genma’s friend’s three daughters.  The Polite and super nice one Kasumi, The sarcastic and kind of bitchy one Nabiki, and of course Akane.  The girl who never wants a boyfriend.  But for some reason has tons of guys trying to beat her up  every day before school so that they can get a chance to date

her.  I’ll explain that later.  Of course the two hate eachother which means they will fall in love at the end.  However the whole will they or wont they scenario isn’t what I love about this series.

“Ranma 1/2” has some really great side characters including Ryoga who is in love with Akane whose curse turns him into a pig.   Tatewaki Kuno also pursues Akane’s hand as well, and wants to kill Ranma for being engaged to her.  However whenever Ranma becomes the girl version.  Mr. Kuno becomes all hot and bothered for his “Little Pig tailed Girl” .  There is also one by the name  of Shampoo.  This lady wants to kill the girl version of Ranma but is madly in love with the boy one  Remember when I mentioned about how a bunch of guys try to beat up Akane before school each morning.  Well it seems that if there is a guy who can successfully beat her at martial arts that person will be able to date her.  Of course the only one who is a challenge is Ranma.  OK, now on to some other characters.    One of the masters of the Tendo Dojo is a small old guy named Happosai.  Now this guy is a very fierce warrior whose fetish involves rubbing up against young girls and stealing their panties .  One of the best episodes is where someone puts a curse on the old pervert that causes girls to run away before he can even reach them. 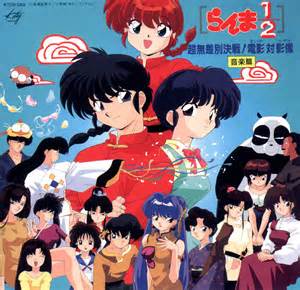 It’s hard for me to comment on this series as a whole because I have only seen the first 5 episodes of Season 1 and then a few random episodes from various others.  I do like that they don’t make Ranma changing into a girl to be a one note joke for the entire series .  Yes, they do play with that premise in the first few episodes of Season one.  But it never becomes an overkill and they do have time to develop other characters.  If this were to be remade in the U.S.  That would be the whole joke.  Also they would make Ranma go on this big journey to solve the curse.  Yes in the show Ranma makes several attempts to go back to the cursed training grounds, but that never was the point of the show.    The family inside the Tendo Dojo never cared if Ranma was a boy or a girl.  They never treated that person any different.  Other people outside did, but it didn’t matter.  I mean how could it.  There’s a dad who becomes a giant Panda bear too.  The show is very funny and if you can find a copy I do recommend checking it out.

Yup, there was even a Super Nintendo fighting game too

I love movies and I enjoy writing about them too. They both go pretty much hand in hand with each other and it's fun to discover new classics. I co host the podcasts The Film Pasture, ScreenTrax, and soon Cinema Recall. While also contributing reviews and articles to other great sites when I can.
View all posts by The Vern →
This entry was posted in Uncategorized and tagged Akria, Anime, blogathon, Bubbawheat, Bubblegum Crises, Channel Superhero, Ninja Scroll, Ranma 1/2, Saturday Morning Memories. Bookmark the permalink.