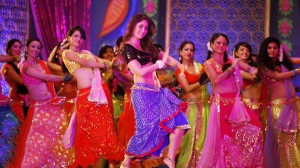 Recently I was asked by the ladies of Across The Universe: The Chicks with Accents Podcast to partake in their Bollywood experiment.  Not knowing a damn thing about any of these movies they thought that I would be a good test subject to watch and talk about these movies on the show(which you can listen to by visiting their website on the link above). The only reference I had to any of these movies was when I saw “Ghost World“(Read my review). There is a musical number that opens the movie and it was the only thing I have seen before that time.    Of course there was Slumdog Millionaire but I really don’t count that as a Bollywood Movie either.

What follows is my thoughts and opinions about each of the four movies I watched.   I am apologizing right now if I don’t mention any of the character’s names.  I either didn’t hear it or I don’t know the correct way to pronounce it. 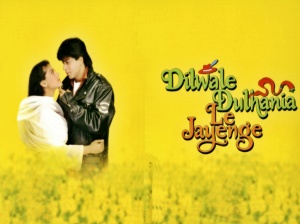 We meet this girl(Kajol) who has been set up by her parents to be married to another guy, but she keeps having these dreams about some stranger.  The song she sings about it sounds more like an alternate to her masturbortoral fantasies, but maybe her culture looks down on things like that. I don’t know.  She gets invited to go to Europe with her friends and while there she meets this guy who at first is kind of a douche.  This guy(Khan) is the kind of character I hate in romantic comedies.  The super self confident guy who sees himself as being really cool and charming, but comes off as being arrogant and rude.  There is a scene where he goes to get beers at a store. The place is closed and the man bothers the store owner to the point that he practically steals the beers(He did pay for them, but he was still an asshole to the guy).    So when I saw that these two characters were arguing.  I had to grit my teeth because I knew at the end they would be together.  When the girl gets home and her father finds out about her affair. He sets up the wedding right away and ships her off to it.   Now the guy she met on the train has to convince her father for her hand in marriage to him instead.  Oh and I should mention that her father is the same store owner from earlier.  As the one bad guy from “Taken” would say.  “Good Luck”.

I will say that as much as I hated that guy at first.  I did appreciate that he had some morals about him.   Everyone including the girl’s mother were telling him that they should just move away and elope.  However he was strong in his commitment in having her father accept his proposal to marry his daughter.  It’s something that I really did like about the movie and near the end of it I was rooting for them to be together.   Dilwalie Dilh(shit I’m messing up on how to say this) has been one of the most successful movies of this genre as it has been playing in theaters for a long time since it was released.  It’s a fun light hearted romp that I enjoyed, but it wasn’t anything too memorable for me.   I did find it cool that the man who played the girl’s dad(Amrish Puhl) was the main bad guy in “Indiana Jones and The Temple of Doom“(read my review here) who ripped out that one guy’s heart.  Having a character go against someone like that is really bold.

In this movie we have one of the most dumbest male characters I have ever seen before.  He makes Lloyd Christmas from “Dumb and Dumber” look like Albert Einstein.  He has this very beautiful girlfriend who is just crazy about him.  Yet he is going to believe some rumor that she has slept with another guy instead of just asking her about it.  Shit, in one scene she practically insists that they have sex, but he instead breaks up with her.  After that the girl is still in love with him too, which doesn’t make her too bright either.  We next get another story about a woman who made a sex tape with her much older boyfriend.  I’m not sure but I think that was her teacher.  Anyway her father finds out about it and kills himself. The girl moves away where she becomes a prostitute in a brothel that is soon visited by the same dumb ass who left his girl in the beginning.  These two characters meet and I guess they really like each other or maybe they were just high, I’m not sure.  However, this idiot is now trying to get back with the girl he broke up with earlier because I guess he doesn’t like the thought of another man  with his property. Yes, this fucking douche treats women like they are products  Luckily, his ex has moved on and now he has this new girl who is cute and likes him.  Why is he such a dumb fuck he can not see that?   ARRRGGGGGG.

This one really got on my nerves.  I would have liked this a lot better if two girls met and then plotted to kill this guy instead.  They were not any musical numbers and the songs used were more a part of a montage then anything else.  I liked that it was a bit of a darker tone, but I’m sure I was supposed to be rooting for this guy, but instead I wanted him dead.

Laagan:Once Upon a Time in India

Each year a small Indian village has to gather up more food then they can produce and then give almost every bit of it away to the British Government .  If this sounds like the plot of “A Bug’s Life“,you’re not far off.     One of the villagers makes a crack about the game of cricket to a superior officer who then makes a bet with him.  If they can beat his team in a game.  They will no longer have to pay any tax for three years.  If they lose,the amount of tax will triple.  The only problem is that none of them know how to play.  Enter in the Officer’s sister who agrees to teach them how to play.

This one was the longest because it is twenty minutes shy of being four hours.  Yet, when watching it. I never once became upset at it’s length because I was really into seeing these characters and their struggle to succeed.  This wasn’t a matter of pride if they won or lost.  This was more a matter of shit, they are going to die if they loose.  The songs are all integral to the plot and I even loved at one point they have a section in English too.  This was nominated for best Foreign Language Film at 2002 Oscars along side “Amelie“(They lost to “No Man’s Land“).  It was one I was most dreading because of it’s length, but it turned out to be very good.

If you can picture a movie where Jason Bourne or John Wick sings a song about a girl they love.  While also kicking the crap out of dudes.  Then you will be in the right mind set to watch this movie  A super spy (codename: Tiger) has been sent to gather information on a professor who may be selling secrets to the enemy.  While there he falls in love with the professor’s assistant and although he knows many ways to kill a man.  He doesn’t quite know how to keep a girl around.

There are a lot of really good action scenes in this movie that really impressed the hell out of me.  There is one sequence where he is fighting dudes on a train that doesn’t rely to heavily on CGI that was pretty cool.  When the musical numbers start, it never felt out of place in term of the actual plot and for me it worked.  I know that this is something that will never work in America, but I’m curious to see if anyone would have the balls to try.  There are some twists that I expected and some that I did not.  “Ek Tha Tiger” was a lot of fun.

I want to thank Mette, Sofia, and Nikhat for inviting me to partake in this experiment.  Bollywood movies don’t get shown very much in theaters where I live so it was cool to see a genre that I have never seen before.  Let me know in the comments if there are any other movies I should watch and I will see you in a few days.  Thank you.

I love movies and I enjoy writing about them too. They both go pretty much hand in hand with each other and it's fun to discover new classics. I co host the podcasts The Film Pasture, ScreenTrax, and soon Cinema Recall. While also contributing reviews and articles to other great sites when I can.
View all posts by The Vern →
This entry was posted in Uncategorized and tagged Across The Universe, Bollywood, Chicks with Accents, Dev D, Dilwale Dulhania Le Jayenge, Ek Tha Tiger, Ghost World, Indian, Indiana Jones and The Temple of Doom, Lagaan:Once Upon a TIme in India, Movie Reviews, movies, Podcasts, Reviews. Bookmark the permalink.

7 Responses to The Vern’s Bollywood Experiment.