One of the biggest problems I’m sure a lot of parents face is what what should their kids be expose to and what should they hide them from.  Yes, we all know that the world itself is a scary place and so showing them a few scary movies.  It may just help prepare them for what lies ahead.  I don’ t fully agree with that statement although I do think there are other venues to show the problems of the world.  Horror movies shouldn’t be one of them.  Some of the movies on this list are scary to youngsters, but they won’t be traumatized by it.  These ten frightful films show that being scared can be a lot of fun and as long as they are with attentive parents. They should be able to sleep with the lights off after watching it.

Note***  The following list is not a worst to best list.  All of these movies are good.

I know many of you reading this right now are rolling your eyes that I would even recommend this movie because you know the ending more then the film.  But to someone who has never seen this before(especially a kid).  It’s going to surprise them quite a bit.  M-Night Shamalan’s name has become a joke in recent years.  We forget that for a short while he made some really good movies.   There are a few gruesome moments that might make kids and parents recoil a little bit but it’s overall message is a very positive one.

I got some flack on The As You Watch Podcast for recommending this one on our “Beetlejuice” episode.  But I will still stand by that it is perfectly acceptable to show young kids.  There isn’t any gore or foul language.  There is no sex except for a couple lying in bed and kissing.  It just has moments that will scare you and an ending that may be quite a surprise for them.  It is slower then a lot of other ghost movies, but it still a well directed and well acted paranormal flick.

8. Night of The Living Dead.

If zombies are going to be in the mainstream.  I only think it’s not only fair, but respectable to show kids where they were created. “Night of The Living Dead” does show people eating human flesh, and a little girl killing her mom.  However the black and white look of it helps dilute many of it’s gory aspects.  It may look like a bunch of people held in a house battling zombies It also  addresses a lot of social and political problems that were going on around that time in history as well.

This is a a very good movie I’m sure many of you have never seen before.  Its about a young boy(Lucas Haas) whose classmates lock him in a closet at school.  While in there he witnesses a ghostly apparition of a girl being attacked. Consumed by these images, the young boy seeks out the mystery of the young girl’s killer.  It is very good and will give both kids and parents a lot of good scares. 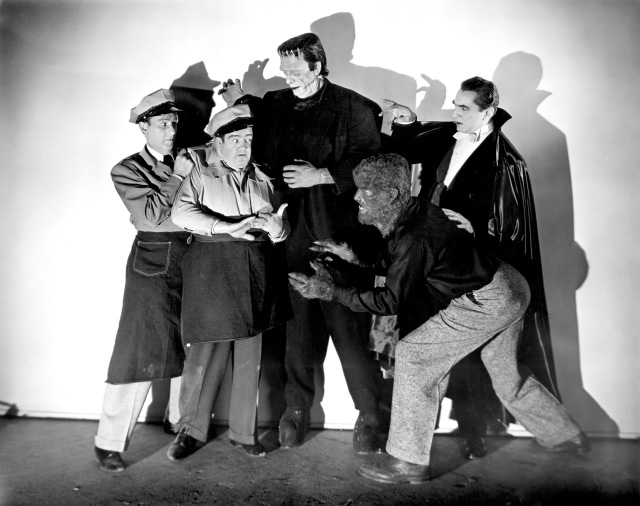 This is a good one that introduces the legendary movie monsters of the past.  Without having to sit through each individual feature.  It even has the original actors reprising their famous roles.  Dracula, Frankenstein, The Wolf Man, and The Invisible man are all here in this very fun film.

This is the only animated movie to appear on this list.  I almost considered “Monster House“, but this one is slightly better.  It has elements of “The 6th Sense” in concept alone.  However this one goes into areas and takes chances with it’s story line that I have never seen before.  Especially in a kids flick.  It also knows the genre well and can poke fun at it from time to time.  Adults will love this one just as much as the kids.  Maybe even more. 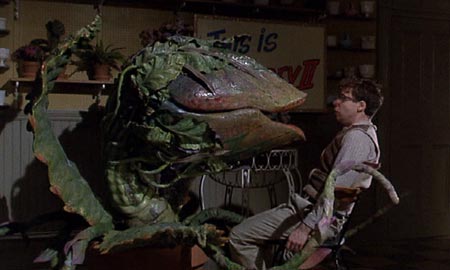 This one may seem a bit too campy to be put here.  Especially because it’s a musical about a man eating planet from outer space.  It still has some elements that can frighting kids like when Seymour(Rick Moranis) does kill someone for plant food(It’s all shown with shadows and no gore).  But the rest of it is just all out fun.  The songs are indeed awesome and are the very best that composers Howard Ashman and Alan Menken have ever made.  They are way better then Disney’s “The Little Mermaid“.

Of all the movies on this list.  This is the one that still scares me when I watch it.  I don’t care how fake looking that shark may appear.  It’s physically there and that shit scares me.  When I was six or seven my parents took me to Universal Studios and I saw that damn mammal with teeth appear up close and it shook me for years. So much that if I see the movie being shown on cable.  I haft to shut my eyes if I click on that channel.  Just in case I happen to see old Bruce.  Yet my niece watched it at that age and had no problems with it.  So , I guess that must means I am a complete wuss.

When I was young a lot of my friends had nightmares after they watched this flick.   Which is understandable because it does have a lot of scary and gory moments throughout it.   Yet it also has a lot of moments that are a lot of fun and help bring smiles to your faces too.  This along with “American Werewolf in London” are the two best examples of how to balance both horror and comedy.

This is one I know a lot of you will hate me for even mentioning.  This movie has many elements that will give kids fuel for a lot of scary dreams.  The dude ripping his own face off in the bathroom, and that freaking clown alone are reasons enough to sleep with the lights on.  But it’s the story of this family beating the odds to help get their daughter back that makes it a perfect family movie.  It doesn’t even start with any big scare moments and unlike a lot of movies within this genre.  You have a chance to spend some time getting to know these characters before bad things start happening.  I can fully expect some kids to be scared by this movie if they watch it alone.  But if they can see that their parents are there to protect them.  I don’t think the will be running into their bedroom as much.

So what do you think of my list.  Do you agree or disagree.  Let me know in the comments below.   I am taking a short break but will be back in a few weeks. In the mean time don’t forget to check out some other great reviews and articles in Movies at Dog Farm’s  Pre Halloween 2014 celebration(click link to learn more)

I love movies and I enjoy writing about them too. They both go pretty much hand in hand with each other and it's fun to discover new classics. I co host the podcasts The Film Pasture, ScreenTrax, and soon Cinema Recall. While also contributing reviews and articles to other great sites when I can.
View all posts by The Vern →
This entry was posted in article, Reviews and tagged Dracula, Frankenstein, Gremlins, Horror, Jaws, kids, Movies at Dog Farm, Poltergeist, Pre'ween 2014, Scary Movies, The Others, Top !0, zombies. Bookmark the permalink.