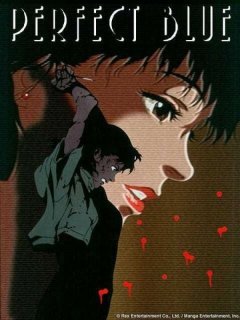 It saddens me that animator Satoshi Kon died so suddenly in his career.  He has created some of the most amazing animated movies of all time.   Each movie is different from the next one, but they all have Satoshi’s visual stamp on them.    If you are an animator or just simply love the stuff.   You really do need to check out this director’s other movies.   This week I have decided to focus on his debut feature “Perfect Blue”

In this movie Mima is a successful pop star with the girl trio Cham.  The band is not a huge hit but it does have it’s hardcore fans.  Being a pop idol is slowly loosing interest with the young singer because she doesn’t feel that other people in the entertainment industry are taking her seriously.   An Opportunity comes up for her to guest star in a gritty prime time drama called “Double Bind“( just think of shows like “Law and Order“, and “C.S.I.“) as the sister of one of the victims.  Despite the arguments from her manager Ruby.  Mima decides to leave the group for her new career as an actress and that’s when things begin to go wrong.  You see their is a fan out there who doesn’t want Mima to succeed as an actress.  He would rather have her back on stage, singing and he is willing to kill people for it.

“Perfect Blue” would be a great double feature with “Black Swan“ because Mima’s quest to become perfect in her role for “Double Bind” is alot like Nina’s quest for “Swan Lake“.   Both women really have a hard time expressing their discomfort with something because they don’t want to upset or anger anyone.  Plus both movies are done from their perspectives so you really don’t know what is real or what they are imagining.  There is one particular montage that stands out because in it. Mima wakes up in bed, walks outside and gets hit by a bus only to wake up in bed.  Thinking it was a dream, Mima gets dressed, goes outside, and gets hit by another car.  However this time when she wakes up she is on the set for the T.V. show “Double Bind“.   The Director gets ready for the next scene and yells action.  This time Mima wakes up back at her place from a dream.  This is the moment that will really confuse a lot of you, but stay with it.  It is suppose to put you in the same mind frame of this character and her journey into madness.

Usually I am against English dubbing when it comes to foreign movies.  I would much rather hear the original actor mouth the words.  But in animation we are not seeing the actors, we are seeing the artists.  Therefore I am not against dubbing for anime and the English voice actors all do a great job of matching their voices to movements of the characters while still expressing strong emotions during certain scenes. The film’s only flaw is in the last few seconds, and the bad voice acting of a few supportive characters, but it’s so minor that it should not distract you from this wonderful movie.

FUN FACT:   Darren Aronofsky, the director of “Black Swan”  bought the rights to “Perfect Blue” so he could replicate a shot from that movie for “Requiem For a Dream“.

(Scene Comparison. Thank you to Professor Mustard of YouTube for uploading)

Here’s a very cool AMV someone made for this movie.  (Warning.  This video has spoilers so If you have not seen this movie, do not watch this)

If you like Satoshi Kon’s work.  Check out this good review of “Paprika” by our friend David of That Moment IN

I love movies and I enjoy writing about them too. They both go pretty much hand in hand with each other and it's fun to discover new classics. I co host the podcasts The Film Pasture, ScreenTrax, and soon Cinema Recall. While also contributing reviews and articles to other great sites when I can.
View all posts by The Vern →
This entry was posted in Uncategorized and tagged Animated, Black Swan, Darren Aronofsky, Paprika, Perfect Blue, Pop Idol, Requiem For A Dream, Review, Satoshi Kon, Thriller. Bookmark the permalink.