Do The Right Thing

Spike Lee’s “Do The Right Thing” should be required viewing for everyone in America. It’s not just a movie you should watch.  It’s one that you need to watch.  There should be a law that states before you can get a state issued ID or before you can get your GED or Diploma.  You must have watched this movie and write at least a 400 word essay about it.   This is one of the best, no scratch that.  This is the best movie about race relationships ever put on film.  Even though it’s set over twenty years ago.  It’s themes and morals are as timeless and relevant even today.  Some have misjudged this movie for saying that it promotes racial violence.  When in actuality it promotes racial harmony.  “Do The Right Thing” is not just a message for the characters on screen to consider, but it also something we should look into ourselves. 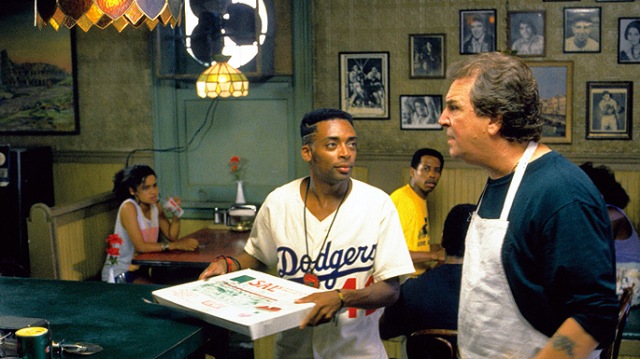 Set within 24 hours on the hottest day of the year. “Do The Right Thing” focuses on many characters and their relationships with each other throughout the day. Two of the most featured characters in this story are Sal(Danny Aiello) the owner of a pizza joint and Mookie(Spike Lee) one of it’s coworkers.  As mentioned there are tons of other characters in this and I will get to them very soon.  But for right now, let’s talk about these two.    Now Mookie is a young black man who lives with his sister(Joie Lee) and has recently become a father with his girlfriend Tina(Rosie Perez).  He is very intelligent and has a great relationship with the residents of the town, but for the most part he seems to just be living just day to day.  He is not at all a bad kid, and wants to indeed better his situations.  But we never see him plan for his future.  This could be contributed to the fact that he is young and like most young people.  They seem to be only interested in the now.  Sal on the other hand is an older Italian man who  has established his pizzeria place for over 20 years.  Unlike his son Pino(John Turturro)  He likes the residents of the town, and gets along with everyone pretty well.  But the guy doesn’t know how to control his anger very well.  If you have any sort of complaints about his establishment or his food.  He’ll start in with some insults and then he’ll just kick you out.  When Buggin Out(Giancarlo Esposito) started complaining that there were no black people on the wall of fame.   Sal just kicked him out without really listening to the guy.  I’m not saying that he had to do what he said and change anything, but he could have at least listened.  He then could expressed that this was an Italian restaurant owned by an Italian.  It would be pretty stupid to have a wall of fame of all Germans or Asians on the wall of an Italian pizza place.  Anger just incites more anger it never quenches it.

All of the other characters in this feel like real people.  Even if some of them are not on screen for very long.  I like the three old men who sit around and talk(Robin Harris, Frankie Faison, Paul Benjamin).  I like the character of Da Mayor(Ossie Davis) and his attempts at impressing Mother Sister(Ruby Dee) while also being a drunk. Radio Raheem(Bill Nunn) plays a very important part even though most of his dialogue is said through the music of Public Enemy and their anthem “Fight The Power“.  Even the Korean store owners are important characters and they along with everyone else makes this universe feel more realistic .

One of the reasons this movie is a classic is because it doesn’t deal with just white and black racism.  It deal with racism from all sides.  This idea is best expressed in this scene where each minority hurls hurtful words at the other person’s race.

I liked  that except for a few characters everyone in this town basically gets along.  There may be a few people who don’t like someone for generic reasons, but that’s true with anyplace.  When one of the three older men expresses his hatred of the Korean store owners. None of the other men agree with him. When Buggin Out tires to get Sal’s place closed.  The only people who will join him on his task are Radio Raheem and Smily a man who is mentally handicapped.  I do wonder though if Sal just asked Raheem to turn his box down in a respectful manner.  Would the outcome that happens still stay the same. 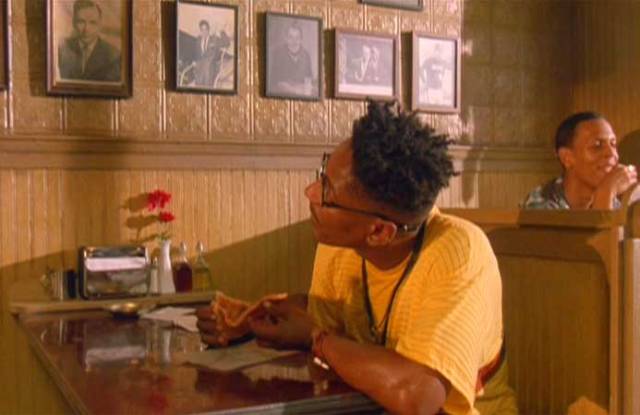 When I first watched this and I saw Sal breaking Radio Raheem’s box.  I first thought that it was a little abrupt.  Sal has lashed out a few times, but he’s never expressed anger to that such high of a level.  But then again, maybe he has and this was a moment that was bound to come.  It also shows in that moment that he can be just as racist as his son Pino.  After all, he had to have learned those words someplace.  This leads into a fight between the two.  The Cops come in to try and break up the fight.  But they end up killing Raheem instead.  No longer being able to take it.  Mookie grabs a trash can and smashes it through the window and the whole town trashes Sal’s pizzeria.

Now most people would consider Mookie’s actions to be careless and destructive, but those opinion are held mostly by white people…mostly(Thank you Newt). What about the actions of the police department.  Weren’t they also careless and destructive too.  Even more so, because they killed a teenage boy in cold blood. All Sal has to worry about it property damage.   I found Mookie’s actions to be not only right but necessary.  The town needed to have a fresh start and cleanse itself of this horrific event. No one would want to visit that establishment after the events there anyways.  So either the place would have closed due to poor business or Sal could just collect the insurance money and start up a new place.   At the very end there is a nice scene where Mookie goes back to get his paycheck from Sal.  Both characters are angry at each other, but there isn’t any big hostility toward each other either.  Mookie doesn’t blame Sal for what happened to Raheem, and although he lost his place.  Sal isn’t really mad at Mookie.  Just watch the moment where they both argue about the amount of money and you will see that there is hope between these two characters.

There are no easy answers in this and that’s what I feel works best about it.  This is a movie that evokes more questions more then anything.  With racism being brought up in the news again.  I feel that this is one that we as a society need to watch.

I love movies and I enjoy writing about them too. They both go pretty much hand in hand with each other and it's fun to discover new classics. I co host the podcasts The Film Pasture, ScreenTrax, and soon Cinema Recall. While also contributing reviews and articles to other great sites when I can.
View all posts by The Vern →
This entry was posted in All Time Classics, Reviews and tagged All TIme Classics, Danny Aiello, Do The Right Thing, Movie Reviews, Racism, Spike Lee. Bookmark the permalink.