Music in Motion: Reviews of Inside Llewyn Davis and Sweet and Lowdown 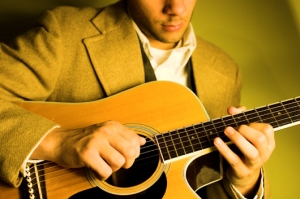 Today I’m going to look at two movies whose main characters share many common traits.  They each play the guitar and are very talented at what they do.  Yet, their attitudes and bad tempers gets in the way of their creativity.  Emmet Ray from “Sweet and Lowdown” and Llewyn Davis from “Inside Llewyn Davis“ 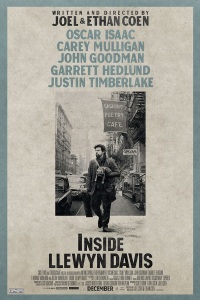 Llewyn Davis(Oscar Issac) is a talented folk singer who hasn’t quite made it as big as he wanted.  He drifts from one gig to the next.  Crashing on people’s couches and basically taking advantage of their nice natures as well. He has no real long term goals and finds people who do are just part of the establishment and slaves to the  system.   While leaving from his friends’ places one day.  Their cat escapes and he ends up having to care for it.  For once  in his life he has someone else to care for besides his own. No this is not going to be some sort of sappy animal love story, but the cat does play a key role in this story.

Llewyn Davis is basically a nice guy who has a lot of soul and passion  that he infuses into his song writing, but never once does he use that kind of fire in his own life.  Even though there are moments where he can be nice.  The guy is basically an asshole. He seems to be jealous of other people’s success and never plans for his own future.  He just wants to make the quick easy buck and get paid fast.  Part of me can identify with that aspect, because I have been broke before.  Some days you just want to have enough cash to get through til the next day.  But if you are not preparing yourself for the days ahead.  You’ll find that when problems come.  You will have to rely on the kindness of others, and if
you are constantly using and putting people down.  Your future won’t look so bright.

The cinematography and the cat are the only reasons I liked this movie.  Oscar Davis is a good actor and he did a great job at making this character very believable.  I just thought  Llewyn Davis was not that great of a character to spend a full movie with.  I don’t mind characters who are brash and kind of loud spoken , but I never found what he did to be all that interesting.  It seemed like his main goal was to make money with his solo record and nothing more.  Oh and to help a girl he once slept with get an abortion.  He was giving a lot of other opportunities but he screwed them up by just wanting a quick easy buck.  He does sort of learn his lesson at the end, but it doesn’t matter because he is still doing the same things all over again.  The songs are good, and if you like this style of music.  I’m betting you will like this one too.  I myself am not a fan, but I won’t hate on it either.  There was one folk singer named Dar Williams that actually surprised me when I saw her.  She was talented, but what sold me on her was that she made a mistake while playing and used it to her benefit.  She was charming and nice and you wanted good things for her.  I didn’t want anything good for Llewyn Davis.  His songs had potential, but since I did not care much for that character.  They did not deliver that much emotion for me.  Hearing the song “Please Mr. Kennedy” was one of the highlights of this feature and was really funny.  I look forward to the next film by the Coen Brothers, but I will never watch this one again.

Emmet Ray(Sean Penn) is considered to be the best jazz guitarist next to Django Reinhart in this faux docu style comedy from Woody Allen.  Emmet is indeed very talented, but he is also very unsure of himself.  He goes for these elaborate presentations that always seem to backfire.  He has confidence in what he does,but is so afraid of failure that he never can express himself fully.  Which may explain why he’s only the 2nd best.  He’s always looking to make a quick buck, which includes things like, gambling,stealing, and prostitution. One of his hookers tells him that a pimp does not need a business card and to not be so flashy.  After he meets a mute woman named Hattie(Samantha Morton) on a double date.  Emmet begins to start having feelings for someone other then himself.  This ends up causing a lot of doubt within him because he feels a true artist can never show any real love.   As much as he tries to deny it, and push Hattie away.  She ends up being a big part of his life and his music.

Sean Penn got an Oscar nomination for this role and he is really good in it.  The character of Emmet Ray is indeed quite vain about himself and should be a character I hate, but I didn’t.  I just found him to be mostly pathetic is all.  The guy loves to take dates to the dump,where he can shoot rats of all places.  He’s a nice guy who treats people well, and I could understand why some women were drawn to him by his music.  But could not really comprehend why many have stayed for so long. He is a guy that has let his own talent go to his head.  Because for years he has been told that he is better then most.  Yet he never once plays to his full potential.  He’s so terrified he’ll never be as good as Django,he forgets that he doesn’t have to be as good as him.  He just has to be a good person himself.   Samantha Morton  was also nominated for her role in this and she fully deserved it.  I’ve always said that it has to be difficult to portray a fully fleshed character without saying any words and she pulled it off beautifully.

The style of this being one of those dramatized retelling of an artists life is really quite interesting.  It has interviews with expects of jazz music including Allen himself who is an enthusiast and does play the clarinet in a New Orleans style Jazz band.   It inter cuts their stories of Emmet Ray with what may actually have happened.  Their is one moment where Emmet Ray somehow gets involved with a robbery and a high speed chase.  Each person being interviewed has their own version of the story and the film shows both.  When the story goes into the third act and we meet Uma Thurman’s character.  It becomes rather dull.  Not dismissing Miss Thurman’s work in this because she is also good.  It just doesn’t have the same type of fast paced wit and style that earlier scenes had.  I get this was the part of the movie that shows the major conflict of the main character.  But it still could have been more interesting.  Luckily Sean Penn and cast managed to get me through this movie to be one I will likely see again.

I love movies and I enjoy writing about them too. They both go pretty much hand in hand with each other and it's fun to discover new classics. I co host the podcasts The Film Pasture, ScreenTrax, and soon Cinema Recall. While also contributing reviews and articles to other great sites when I can.
View all posts by The Vern →
This entry was posted in Music in Motion, Reviews, Uncategorized and tagged Coen Bros, folk singers, guitar players, Inside Llewyn Davis, John Goodman, Movie Reviews, Oscar Issac, Samantha Morton, Sean Penn, Sweet and Lowdown, Woody Allen. Bookmark the permalink.

6 Responses to Music in Motion: Reviews of Inside Llewyn Davis and Sweet and Lowdown