Criterion Corner: My Dinner with Andre. 1981 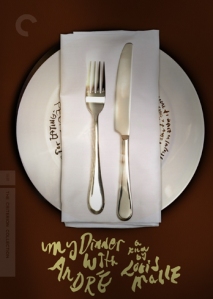 I want to start off this review by stating that in no way do I recommend that you watch this with other people.  This is not a party movie or a date movie in any way, shape, or form.  This is one that is best watched alone.  If you give this one a serious chance, you may find some of the things discussed are related to where you are in your own life.

The story is very simple.  Two old friends (Shawn and Gregory, playing characters with the same names) meet in a restaurant one night and they begin to talk, and talk, and talk.  Their conversation lasts a whole two hours and, to be honest with you, at around the twenty minute mark I almost shut this movie off.  It’s not because I don’t enjoy a good conversation or good dialogue, because I really do.  “Glengary Glen Ross” has a lot of talking and it’s a bona fide classic.  Same thing goes for “Waking Life“, “12 Angry Men“,  “Reservoir Dogs“, and many others.  Those movies were mostly dialogue driven.  Mostly.  But this one didn’t seem to go any where.  Andre was doing all of the talking at first and his stories were not that interesting.  It was just about where he traveled and some of the different people he met.  It was a major snooze fest, and just when I was about to curse everyone involved in this movie for dealing me some bad shit, WHAM!! It hits me.  One of the characters says something that sparks an idea in my head.  What he says will be irrelevant to you, but it sparked feelings inside me about where my life was and where it was heading that I had never thought of before.  It was the first time I felt my successes out-weighed my failures and I no longer felt depressed about my place in life.  I’m not saying the movie will have the same effect on you as it did for me.

Most people will mainly know Wallace Shawn from his role in “The Princess Bride” (“Inconceivable”) and as the voice of the Dinosaur in the “Toy Story” trilogy.  It was interesting to see him play a regular person and the voice of reason to Andre Gregory’s rants about the human condition.  He, in some ways, represents the audience.  I have never seen Mr. Gregory in anything before this and when I looked him up on IMDB I recognized the titles he was in, but not him.  I’m not going to rate this movie, because it’s hard to critique something as simple as two guys sitting at a table and talking.  There wasn’t a story or visuals to discuss, just two people having a conversation.  Their discussion spoke to me, but it may not speak to you.

I love movies and I enjoy writing about them too. They both go pretty much hand in hand with each other and it's fun to discover new classics. I co host the podcasts The Film Pasture, ScreenTrax, and soon Cinema Recall. While also contributing reviews and articles to other great sites when I can.
View all posts by The Vern →
This entry was posted in Criterion Corner and tagged Andre Gregory, Criterion Collection, Movie Reviews, My Dinner With Andre, Wallace Shawn. Bookmark the permalink.

8 Responses to Criterion Corner: My Dinner with Andre. 1981