The Vern tries to find a “Safe” place for Julianne Moore, and review her movie.

What if you were to wake up one day and found that everyday normal things in your life made you severely ill.   Driving in rush hour traffic caused you to cough uncontrollably for hours.  The smell of perfumes and colognes made it difficult to breath and wearing any type of makeup or aftershave made your skin break out in hives.  These types of ailments haunt Carol White (Julianne Moore), but no one seems to believe her.  Both her doctor and her husband believe this is all in her head, but Carol knows the truth.  She has become allergic to the 20th century.

Set in 1987, Todd Haynes‘ “Safe” Tells the story of Carol White(Julianne Moore). A Housewife living in the San Fernando Valley  Carol leads a very ordinary life where very little much happens.  She doesn’t work and spends most of her days gossiping with friends and going to yoga class.  Since she lives in the city, Carol is exposed to a lot of smog, and other various chemicals around the air.  She starts feeling ill,but she assumes that it’s probably just allergies and moves on.  However the symptoms continue to get worse, and in some instances,more violent.  In one key scene, she is at a party when all of a sudden she can no longer breathe.  It’s like the disease is a monster waiting for the right moment to strike.  When she goes to the doctors, no one can find anything wrong with her.  However Carol firmly believes that she is becoming highly allergic to all chemicals.even smaller ones.  This condition is known as Multiple Chemical Sensitivity or MCS. 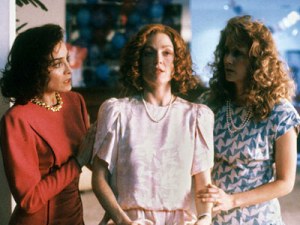 Multiple Chemical Sensitivity is considered by many to be a real thing even though many scientists and doctors discredit it.  Stating that low levels of chemical intake should not be the cause of a person’s illness.  I find this to be very fascinating, and was very much involved in this movie and finding out some of the answers to this.  When Carol’s attacks come on it’s almost like watching a horror scene. You can clearly see that something is trying to kill her but you can’t see what it is.  Julianne Moore is incredible in this role because you feel bad for her, but at the same time are completely helpless as to try and help her.  I was even impressed that the character of the husband (Xander Berkeley) remained supportive of his wife when most movies would have had him leave.  The only major critique is that after Carol gets to the sanctuary the movie does slow down a bit.  The community she joins does give her the kind of love and attention she was missing when she lived in the city, but I never found any of them to be all  that interesting.   There are some good moments that show Carol’s improvements, but it just drags on forever and if you are not patient.  You might find yourself shutting this movie off before the last moment. Which in itself is kind of beautiful.  However I wont doubt that many of you will still make jokes at it.  I know I did.  The performance by Julianne Moore alone makes this one worth seeking out.  I just wish they would have made the second half just as interesting as the first.

I love movies and I enjoy writing about them too. They both go pretty much hand in hand with each other and it's fun to discover new classics. I co host the podcasts The Film Pasture, ScreenTrax, and soon Cinema Recall. While also contributing reviews and articles to other great sites when I can.
View all posts by The Vern →
This entry was posted in Reviews and tagged 1995, Dramas, Julianne Moore, Movie Reviews, Multiple Chemical Sensitivity, Safe, Todd Haynes. Bookmark the permalink.

4 Responses to The Vern tries to find a “Safe” place for Julianne Moore, and review her movie.