The Vern visits Cool World and admits it’s a nice place to visit but he doesn’t want to live there.

Back in the year 1992 I became a huge fan of animation.  I was already a fan of Disney features, The Looney Tunes, and the wild antics of most animated television series such as “Animaniacs” and “Tiny Toons“.  This was also the year I got into anime and discovered there were cartoons that were a bit more realistic.  Movies like “Akira” and “Wicked City” and series like “Bubble Gum Crises” and “Ranma 1/2” showed real life people and they had content that was a little bit more mature then the ones I have seen before.   Also around this time “Who Framed Roger Rabbit” had been released on VHS and I must have seen that flick a bunch of times at home. The blending and both live action and animation were so good and I loved that it had been a bit risqué in certain parts.  So when I started seeing ads  like this being played on TV I got excited because this looked like the punk rock approach to that other film.

After seeing that one of the main plot points involved cartoon characters having sex with humans  .  I will admit at that time I found the whole idea to both funny and a little titillating too.  Let’s not forget I was around fifteen when this came out, and like many other men.  I found sex everywhere.  I would be watching reruns of “The Jetsons” and would be asking myself, what color panties does Jane wear?  I can’t beleive I’m sharing this with you, but I’m sure that every guy here at one time or another has been sexually aroused by a cartoon character at some point in his adolescence(I secretly wished Jessica Rabbit had a nip slip in that Roger Rabbit flick). If not he is either  in denial or has never watched a cartoon before. Lucky for me I had a friend who was also thought that this looked good so the two of us went one day to check this out.

The story is about a cartoonist named Jack Deebs (Gabriel Byrne) who while at Prison gets zapped into this animated world(dubbed Cool World) where he is seduced by Holi Would(Kim Basinger). Umm wait minute, maybe I should go back a little bit further and explain that in 1945 a soldier named Frank Harris(Brad Pitt) comes home to visit his mother.  The two get into an accident while on Frank’s motorcycle and the mother dies.  Frank ends up in the Cool World because one of their scientists was trying to cross over into this world, but somehow brought the solider over instead.  Holi desperately wants to be real and has been after every noid(aka Human) who has passed through but no one has been crazy enough to get involved.  At least that’s what Frank tells Jack.  The one and only rule that this world has is that noids do not have sex with doodles(cartoons).  Sound advice I’m sure but keep in mind too that Jack has been in prison for a while and really has not had any full sexual release in those years.  Plus I can’t say I blame the guy for being interested after watching Holi Dance in this clip below.

I know this is an old movie and I highly doubt anyone who hasn’t seen this before, already knows what happens.  Yet still I gotta put this disclaimer on here. 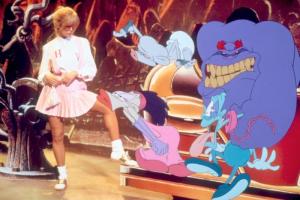 Both Holi and Jack have sex but it just looks like they are just dry humping because their clothes are kept on.  She removes Jack’s shirt, but not his pants.  Maybe they do things different in that town when it comes to sex,I’m not sure.  Once she becomes real the two go back to the real world, and that’s when the trouble begins. At random they each turn into a doodle without warning.  I’m guessing that this is the STD humans get when they don’t wear a condom before banging cartoon characters.  Holi believes the issues to her problem lies in a mystical spike that will help keep her human.  Frank goes back to the real world to try to stop her, but once he confronts her.  She turns back into a doodle and pushes him off the side of a tall building.  At this time the scientist from before appears and tells Jack that he is the only one who can help stop her.  With the power of his mind he uses his cartoon hands to help pull him up to wear Holi is.  Once he gets there, he turns into an animated Super Hero, but Miss Would has already pulled the Spike.  This causes both worlds to collide and causes everyone to turn into a cartoon. They fight a little and somehow Jack ends up retrieving the Spike and closes the gap between both worlds.  Frank’s girlfriend Lonette discovers Frank’s body and is upset at first but becomes glad when she is told that he was killed by a toon.  This causes him to become a cartoon character himself which is great because now him and his doodle can have sex when they couldn’t before.

Rewatching this again, I found that there is still a lot of things I like, and no I’m not talking about Holi Would.  The hand drawn animation is very fluid and almost looks rotoscoped but it isn’t.  The background has stuff happening all the time throughout this feature.  None of it makes any sense, but this is supposed to be a world where noting does make sense so it fits perfectly.  The use of electronic and industrial music really help out this movie and I love the soundtrack even more than the actual movie itself.  The bad thing about “Cool World” besides the story which I will get into later is the blending of live action and animation.  It is pretty bad and if you have a good TV you may be able to pick on these flaws much easier than I did back in 1992.  The human actors are OK in this, but Brad Pitt seems to be the only one who is consistint in his portrayal of a guy from the 40’s.  When the animated Holi Would becomes the flesh and blood Kim Basinger.  She has the same kind of look but her personality seems different. 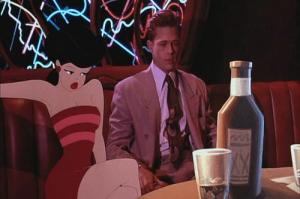 Now this version that got released was not the one Director Ralph Bakshi had intended.  After all this was the guy who created the first X rated Animated movie “Fritz The Cat” as well as other more adult oriented animated flicks.  The original concept was about a half-bred human and cartoon girl who vows to kill her father after he abandoned her.  It was going to be a horror movie and be rated R.  The producer Frank Mancusco Jr. brought on two writers to change the script and their contribution is what caused the film to fail.  I’m not saying that this would be a major blockbuster if Bakshi had kept his original concept,it would still fail.  But the idea of toning down this Hard R rated feature about toons having sex with humans for a PG-13 rating is a bit ridiculous. Even from a studio stand point.  If someone would be brave enough(and no one will be) to remake this.  I would be very curious to see the result.  I wont ever say that this is a good movie because it isn’t.  But it does have enough good moments(not just Holi) that makes me want to visit it again.

I love movies and I enjoy writing about them too. They both go pretty much hand in hand with each other and it's fun to discover new classics. I co host the podcasts The Film Pasture, ScreenTrax, and soon Cinema Recall. While also contributing reviews and articles to other great sites when I can.
View all posts by The Vern →
This entry was posted in Reviews and tagged Animation, Brad Pitt, Cartoons, Cool World, Gabriel Byrne, Kim Basinger, Movie Reviews, Ralph Bakshi, Sex, The Vern's Video Vortex. Bookmark the permalink.

4 Responses to The Vern visits Cool World and admits it’s a nice place to visit but he doesn’t want to live there.