Yes I know this is not a precode movie, but I still believe it belongs in this section. Mainly because there is no way this movie would have been released today with just a PG rating. 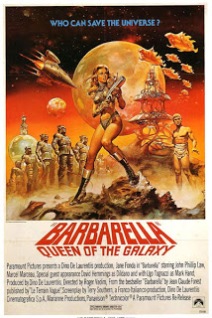 Writer:  Terry Southern – based on the comics by Jean Claude Forest

Before the movie even begins, we get a notification that it is going to be rated PG.  After that, the movie begins with a great credit sequence of a woman stripping out of her space suit in zero gravity.  The text of the credits tries their best to hide some of her nakedness, but thankfully not enough.  Based on this sequence alone, you should understand that this will be filled with a lot of sexual innuendo and nothing more.  One that would have just enough nudity and sex, without being too gratuitous about it.  The film does suffer from having bad special effects and horrible acting, but it does have some funny and sexy  moments to not make me fully hate it.

The story  involves a top level space secret agent named Barbarella (Jane Fonda).  Imagine a hotter female version of James Bond, but in space.  She is on a mission to find the evil Durand Durand (Milo O’shea) so that she can bring him back to Earth and destroy his weapons.  Along the way, she meets up with other men and a woman who help her with her quest and in return she helps by having sex with them.

The so-called love scenes are the best parts of the movie.  They are so absurd and crazy, but are not played for just  laughs, which in turn makes them extremely funny.  In one scene, a man wearing a fur suit seduces Barbarella into having sex with him.  After she agrees, he removes his suit and is covered with thick body hair.  Another funny scene involves her being trapped in a machine that is supposed to give you the most intense orgasm ever, so that you end up dead.  However, the machine can’t take the intensity of her erogenous zones, so it short circuits and is destroyed.

It’s easy to dismiss this movie as just being a male fantasy and I won’t argue that point.  But this was made very shortly after, or possibly during, the sexual revolution.  Before that time, women were not as free to express any type sexual liberation.  Now I’m not saying that woman had to have sex with many partners to feel liberated, but to even have that idea was very taboo at that time.  In each scene where sex is occurred, the choice always was with the woman.  The only time it was not was when she gets trapped inside the machine, which she ends up destroying.

This almost would be a good double feature with Stanley Kubrick‘s “2001: a Space Odyssey“. Both movies were released in the same year and the special effects are very different.  Kubrick was working on  getting a realistic version of space, while Vadim was trying to capture the silliness of the comic series.  Many Sci-Fi movies try too hard to make their movies appear more serious than they actually are.  “Barbarella” knows that it’s a bit cheesy and doesn’t try to hide it. 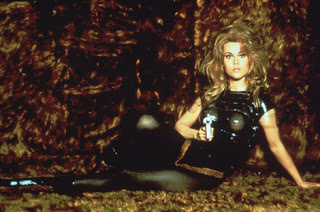 I love movies and I enjoy writing about them too. They both go pretty much hand in hand with each other and it's fun to discover new classics. I co host the podcasts The Film Pasture, ScreenTrax, and soon Cinema Recall. While also contributing reviews and articles to other great sites when I can.
View all posts by The Vern →
This entry was posted in Forbidden Hollywood and tagged Barberella, Jane Fonda, movies, Science FIction, sexy, stripping. Bookmark the permalink.